Peter has worked with Andrew Van Slee, who has produced for many artists, notably Michael Bublé, and worked with other well known JUNO award-winning musicians.   These collaborations have led to him forging mellow yet polished tunes for his listeners.   Peter’s distinctive voice, exquisitely fashioned balladry and uplifting melodies put him in a category that exudes sophistication, elegance, and class.

Peter is a versatile performer who works with a large roster of professional musicians to entertain an audience as a Vocal Piano, drum, bass jazz trio to a 5 pieces ensemble.   The cover songs and original songs are in classic swing pop, and smooth jazz genre which reminiscent of the glamourous era that gave life to the Greats such as Frank Sinatra, Nat King Cole and Ray Charles but infused with a few Billy Joel and Elton John. 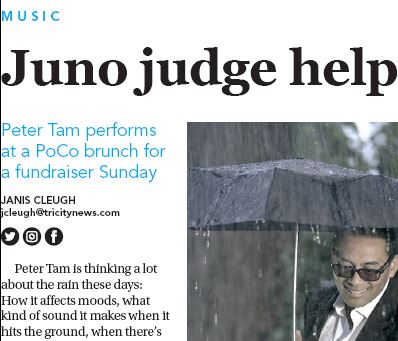 House Concert – Fly Me to the Moon

“Peter is carving out a a respectable niche in the West Coast pop/jazz scene. His songwriting is unique and refreshing. A pleasure to work with. Definitely someone to watch!”

“Peter Tam has put together a delightful set of personal piano jazz vocal originals reminiscent of Harry Connick Jr sprinkled with a taste of Michael Bublé.”

“Another collection of fantastic new original songs Peter. Your melodies and smooth delivery remind me of Bublé or Sinatra !! Looking forward to more 🙂 !!”

“Peter Tam is a relaxed, happy musician and those qualities can be heard all through his original pop-jazz songs. As he tickles his piano, he sings about themes inspired from life on the west coast.”

“The sound takes me to a jazz club decades old, when people went out for the night dressed in class, sitting in low-lit, smoke filled rooms listening to the best of the best jazz a club owner could find. Tam has elegantly revived elegant lounge jazz”

Next to be released

Thank you for subscribing.

we respect your privacy and take protecting it seriously